You are here: Home › Writing Posts › Become a Master

Note: this article was originally published on Monday, March 21, 2011 on my now deceased blog. 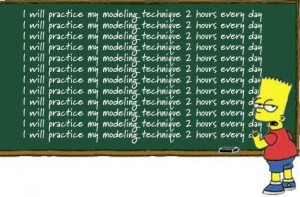 They (experts) say it takes 10,000 hours of practicing to become a master in your field.  That equates to 3 hours of practice each day for 10 years.  Or 5 years of full-time employment.

A test was done in the 90s where student musicians were divided into three groups.  The results showed that the masters had put in 10,000 hours, the good 8,000 and the average 4,000.  No one was ahead of the curve.  Next they applied the test to other fields and the same results were achieved.

So what I’m trying to say is, practice is the only way to get better at writing.  To test this theory, I took a look at my own writing, which I got serious with about nine years ago.  Now granted, I’m not near mastership yet—there are many gaps in there filled with a lack of motivation/writer’s block/life.  But I’m definitely able to sit back and see how my hard work has paid off.

For the sake of this test, I’m only using the first 200 or less words of each novel.  (There are 6, but I’m leaving one novel off because I’m currently reworking it.)

Clouds that appear to be the purist of pure black and seem to be infested with over populated bodies of water, crowd the greatest city of all.  Ready to unleash a beast that will punish the city.  Yes, nature knows what is in store for this city.  This city where life is described as wild and erotic.  Where money and glamour get you fame and fortune.  Where people who don’t succeed become nobodies.  Yes, in this town, a nobody is close to impossible to find.  Especially when the rain creates a mesh sheet with bite size holes devouring every city block. But for the length of the rain, it overwhelms the noise of the over populated city life.  It also causes blindness.  What can we not see that the rain blocks out?  What can we not hear that the rain mutes?

Notes:  Reading this opening paragraph now makes me cringe.  And the funny thing is, it only goes downhill from here.  I switch back and forth from tenses.  Use too many clichés.  There’s stilted dialogue.  And I apparently loved creating comparisons which didn’t make any sense at all.

“It’s such a beautiful day.  To think I waited for a day like this for so long and yet I wish it had never come.”

“I have a surprise for you.”

“Where are we going?”

“Come on Sid, you know I hate it when you do this.”

“Just come with me.”

Sid took Kia’s hand and led her down the stairs of her house to the front door.  He then grabbed the doorknob and twisted it clockwise.  Oblivious to what was going on, Kia kept interrogating Sid as to where he was taking her even though she knew he wasn’t going to tell her.

Notes:  Okay, so it might seem like I actually regressed here, but I read a bit further and found that I no longer confused tenses, but I apparently forgot how to add dialogue tags.  The characters are still as dimensional as cardboard cutouts, but the sentences don’t seem as clunky, and I’m not over describing unimportant events like rain falling on a city.

“Hitler,” spoke a naked man in a deep voice, isolated in a dimly lit room as homey as a cardboard box.

He stepped out of a molding machine that had just applied a cyber skin over his body and onto the cool concrete ground.  He was now presidential body guard James Fallon Carre.

A single light, buried in the center of the ceiling, illuminated a computer bin several steps away that automatically hacked the building’s database to account for his attendance.  As he approached it, the top drawer unlocked and slid out displaying black dragon-scale armor, a security belt equipped with communication, subdue gun and pistol, and a death helmet which was a modified gas mask.

After dressing, he jammed his skeletal thumb into his collar bone, ejecting a skin-colored button to reveal an operating dial.  As he turned it, his voice changed.  Once the correct setting was located, he plugged the button back into his body and pressed an exit switch on the bin.

Notes:  This seems to be a vast improvement.  The narration flows better, and even though there are unnecessary details, I don’t see any glaring errors.  Knowing where this goes though, I have to say, unnecessary details really hold this novel back.  Clocking in at 107,000 words, there are simply too many characters and plots running rampant without any parental control.  The end result proves I tried to “solve the world’s problems” in one novel.

By the way, I dread looking back at this one, because I spent so much time on it, and I know it’s going to sit in a folder for the rest of eternity.

Notes:  It seems this is where I began to develop my own unique voice—something every author needs to separate them from the pack.  It comes out in bits like, “even the shower” and, “he liked to point his weapon at things.”  I have a better flow to my narration, and even though I’m still stuck on some clichés, my descriptions have become much more varied.  It seems I also solved the problem of trying to do too much, as this novel clocks in at just under 70,000 words.

They say you’re supposed to start the story as close to the end as possible.  If you don’t, audiences of today will stand up during the climax and go to the bathroom, or turn the channel, or shut the book, but that’s if people read anymore.  They say nobody does.  It takes too long, and it’s boring.

They say it’s imperative to cut.  To pretend stories are women.  If you want to be anything that matters, you cut out fat and sodium, sugars and grains.  You need to starve yourself and avoid becoming bulimic, because acid reflux causes serious damage to teeth.  Water is your friend, but only from bottles.  And if you aren’t bare bones by the time someone important enters the room, you might as well gorge yourself on everything you’ve missed the entire time leading up to this point, because they say you’re lucky to get one chance.  Expecting two is like asking NBC to re-run a season of Veronica’s Closet.  And if you’ve never heard of the show, then you’re supposed to get the joke.

Notes:  The most noticeable change here is the switch to first person.  I had never done it before.  I never even thought of doing it.  Not until I read Choke and Invisible Monsters.  Those books helped me realize the opportunity I was missing to get personal.  To reach a new level in writing.  The flow of the story is at its best, and the comparisons not only make sense, but they’re unique and cohesive.

I think this little timeline proves the 10,000 hours theory.  Even though I’m probably around 8,000 hours, I see a massive improvement in my writing from past to present.  What you don’t see in there are the countless hours I’ve spent in writing groups critiquing other’s work.  From those groups, I learned many rules, common author pitfalls and all about clichés.  But most importantly, I learned how to edit.

Throughout the years, I’ve wanted to quit many times.  After each rejection, each harsh critique, each novel that got pushed into an abandoned folder, I really wanted to give up.  I read published novels and said, “Man, I’ll never be this good.”  I read other’s work and said, “Damn, this is like ten times better than mine and it’s not even published.”  I reread my own work for the 100th time and said, “This isn’t as good as I thought at all.”

But I hung in there.  I came back stronger and worked harder each time.  I fought until I could edit my own work, and I fought until I found my voice.  And now, after a very long road, I might not have a novel published, but I’m extremely happy with the quality I’m producing.

So if you’re confused or frustrated or feel like quitting because your work isn’t meeting your standards, then relax, take a little break, realize that progress is slow and come back stronger to start working toward that 10,000 hour mark.