You are here: Home › Uncategorized › 14 Villains You Know

Do all villains suck nowadays, or is it just me?  I’m so sick of world domination.  Why can’t an evil dude just want to get under one person’s skin?

This villain can walk no faster than 1mph, and they always manage to get in front of you, especially in hallways, clogging the way.  They’ve had eyes installed in the back of their heads, so when you shift to pass, they shift as well.

The best moment comes when you decide to take a long-cut.  Sure, it’s a pain in the ass zig-zagging up and down aisles, jumping over tables and kick-spinning around people who stepped out in front of you, but it’s worth looking like a complete goddamn idiot just to get ahead of The Tank.  But when you swerve back onto the main pathway, you find you’re still behind them.  Little did you know, The Tank has a turbo boost saved for people just like you.  It’s blatantly obvious when they’re huffing and puffing, ready to die, and it shows when they slow down to a quarter of a mile per hour.  If The Tank’s angry enough, they’ll collapse and ask you to fetch a medic, ensuring you never make it on time to your destination. 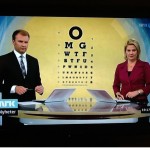 You know you’re talking to Shortened when you ask them how their night was and they say, “Totes fab!”  You say, “What’d you do?” and they say, “Obvi a ridic staycay wit peeps, y, u jelly?”  You say, “Not really, since I did something similar, I guess,” and they say, “For realz?  Amazeballs coinkydink!  Nom, nom, nom.  YOLO!  #justsayin.” 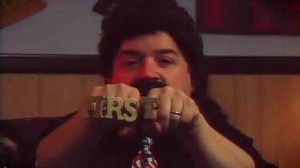 This bastard is always first.  A video popped up online two seconds ago, so you check it out, and in the comments, this villain’s shouting, “First!”  You see an open lane at the grocery store, think, “I have less than ten items,” you go to checkout, and bam, they slide in front of you and shout, “First!”  At a crosswalk, First beats you to the button.  In the bathroom, First beats you to the only stall.  Your pot of coffee just finished brewing, you hear, “First!”  At a random pond, you hear, “First!”  First is even picked first for jury duty, and you’re so pissed that you botch the case, ensuring that the killer goes free.  That last sentence only happens in Florida.

Imagine for a moment that you’re on vacation, and you and your family of four and all of your ten suitcases and random bags that are tearing open because you shoved too much shit inside of them are all crammed inside a tiny elevator.  All you want to do is get out of there because it’s hard to breathe.  Not to mention you just endured a seventeen hour car ride.  But alas, when those sweet doors open up on the thirtieth floor, Coming In is there, trying to wedge their ass into any available space.  You’d say something, but Coming In’s back is facing you and the first floor button was already pushed and the doors just closed.  To top things off, your youngest child was somehow left on the thirtieth floor, and Coming In farted. 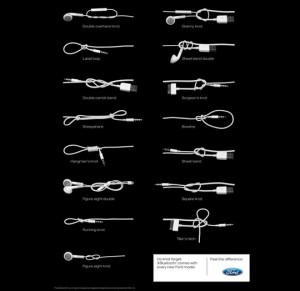 This villain is like a ghost.  You neatly wrap your earbuds’ cord around your iPod and safely deposit it into your pocket.  You don’t move your torso much while walking, but low and behold, when it’s music time again, you carefully slide the iPod out to find that the cord had been tangled into eight different kinds of knots courtesy of The Knotter.  You didn’t even know eight categories of knots existed, but now it’s going to take you a half hour to untangle the damn thing, so F it, you’ll just listen to the trolley music.

The Smudger drags a fat thumb across your glasses’ lens.  If your day wasn’t shitty enough to begin with, The Smudger will compensate by thumbing both lenses.  If you just had the best day of your life, your TVs, mirrors, phones, windshields, spyglasses and even kaleidoscopes are probably in for a good thumbing. 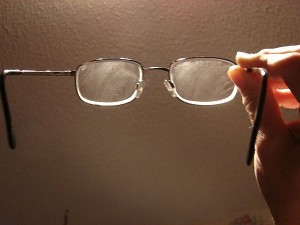 You’re starving, so you go to grab your last resort Hot Pocket or Lean Cuisine or Pie from the refrigerator.  It’s the food which you properly labeled with your name, cubicle number, date of insertion and phone number just in case the food caused a commotion.  You barely make it to the fridge, you’re that hungry.  And thank God for backup food, because you’re broke, that’s why you work in an office.  But then son-of-a-bitch, the fridge is full, so you go through, shifting people’s bags and containers and lunch boxes, and for real, somebody actually put a bed sheet in there?  Your coworker comes over and plucks the bed sheet from your hand, opens it up, wraps themselves up in it and says, “Don’t you just love cool sheets?”

You’ve done it once, but it’s time to shift every piece in that fridge around one more time, because it’s been fifteen minutes, and now you’re contemplating eating that naked quarter stick of butter fused to the door’s top shelf.  During this ordeal, your boss thanks you for cleaning and organizing the fridge, and you weren’t gonna do it, but now you have to.  An hour later, when you find part of your food’s packaging with a note attached saying, “Waz Broke, Sorryz:(” you explode with emotion, but remember, The Leech is always watching you from afar, laughing at your misfortune.

The Talker is most powerful when people are trying to enjoy something, take for instance, a movie.  During cinematic climaxes, this villain will often fire out a rapid burst of sarcastic comments.  This power is devastating when The Talker sorta has a point.

The Hunter is usually young, has absolutely no obligations, like a job or kids, and owns a wolf.  Why a wolf?  No one knows why.  But at the most inconvenient times, right before you enter deep sleep, they let their wolf out to pee and go back to bed.  The wolf howls and howls, because wolves never stop howling.  You engage in an epic debate with yourself for over two hours, at which point you finally decide to phone the police.  But The Hunter hears your call over their scanner and brings the wolf back in so you end up looking like an idiot when the cops arrive. 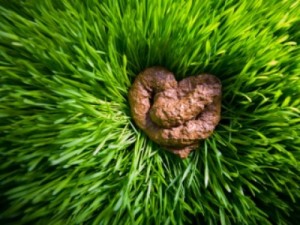 This villain’s secondary power is letting their wolf shit anywhere but on their own property and not picking it up. 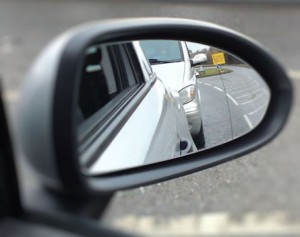 This villain comes out of nowhere.  You’ll be driving, see them a mile back, and all of the sudden, typically during a blink, they’re on your ass.  Their mission is to get so close to your bumper that they vanish from all of your mirrors.  And the worst part is, you can’t get over any further because you’re already driving in the right-most lane on a six-lane highway at three in the morning with no one else on the road.  You’d drive in the shoulder, but it’s filled with glass, a million pieces of truck tires and severed deer heads.

The Invisible Little Bitch’s secondary power is an invisible turn signal.  They enjoy using this one at stop signs, but their favorite moment comes when you’re behind them driving on a one-lane road, and just before their turnoff into a hidden driveway, they slam on their brakes, ensuring that the car behind you crashes into your back bumper, then they make the turn.  Once traffic is stopped because of the accident, The Invisible Little Bitch pulls back out onto the road and drives away.

Just Cruising likes to go twenty-miles-per-hour slower than the posted speed limit…in the passing lane!  Beeping only makes this villain stronger, leading to decreases in speed and even brake-checking.  And be wary, because if a lane opens up and you try to pass this villain, there’s no speed they won’t top just to stop you from getting in front of them.

Imagine your favorite show just popped up online, and you desperately want to watch it within the next hour so you can get a decent night’s sleep.  This is when 1 Bar strikes by killing your Internet connection.  This villain often works for Time Warner Cable. 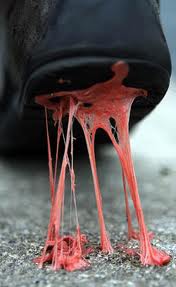 You may have thought it was a horrible coincidence when you stepped in that enormous wad of gum (was the person chewing an entire pack or something?).  But Gummed Ya, like The Knotter, snuck over when you weren’t looking, perhaps you were opening your car door, and slid the wad under your favorite shoe.  Gummed Ya’s powerful gum has been known to remain stuck to soles for up to 2 years.

Jack of Many Trades

I saved the best one for last.  This villain does a lot, and unlike most jacks of many trades, this one is a master of all of them.  Here’s a list of their powers: